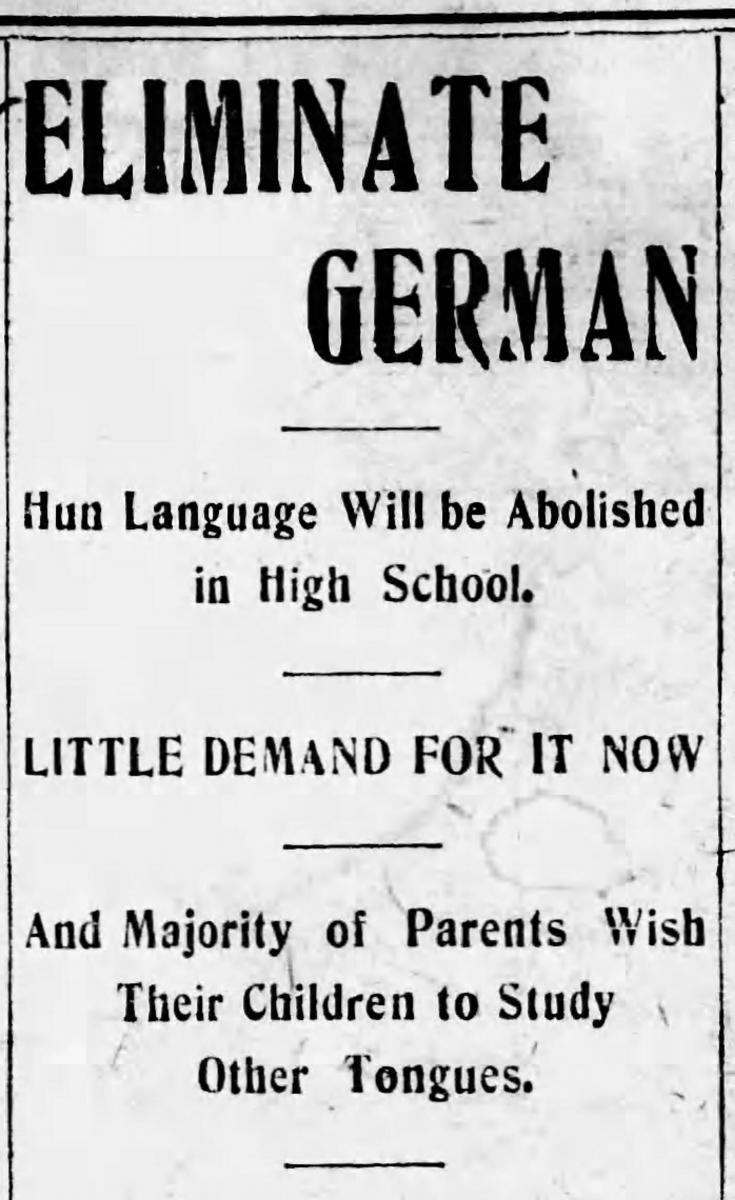 A persistent belief held by many is that anti-German hostilities during the World War I era brought about the end of German as a heritage language in America. In support of this view, observers point to a steep decline in the use of German in institutions such as schools, churches, and the media in the war years. They go on to speculate that public expressions of hostility inspired German-speaking parents to cease transmitting the heritage language to their children. It is true that there were many incidents of harassment and persecution of German Americans at that time, and numerous municipalities and states passed legislation curtailing or even banning the instruction of the “Hun language” in schools (see the image at left from the Hutchinson [Kansas] News, March 28, 1918). However, a close look at the historical record shows that Germanophobia played only a supporting role – at best – in the decline of the use of German in the US.

The strongest evidence against the thesis that World War I sounded the death knell for German in America is the simple fact that there are in this country still today thousands of speakers of varieties German who were born here, four generations or more after their ancestors emigrated from Europe. Across the Midwestern German Belt, south through the Plain States and deep into the Hill Country of Texas, it is not hard to find non-immigrant Americans for whom German is a mother tongue. Into the 1960s and later, these people still read German-language newspapers printed in America and attended German-language worship services. True, in many historically German-American communities, there are few fluent speakers younger than 70. Yet the fact that so many heritage speakers of German in the US were born decades after 1918 casts serious doubt on the World War I thesis.

Even more strikingly, there are literally hundreds of thousands of native-born Americans (and Canadians) who speak varieties of German that remain vital languages, meaning that children continue to acquire and actively use them. I am referring here to members of highly traditional Anabaptist Christian groups, notably the Amish and Old Order Mennonites, who speak Pennsylvania Dutch; smaller groups of Amish known as Shwitzer who speak forms of Bernese Swiss German and Alsatian; Hutterites, whose mother tongue is descended from Austrian German dialects; and Low German–speaking Old Colony Mennonites. Owing to large average family sizes (ca. 7-8 children) and low attrition rates, the growth of these communities is exponential: no other human populations are growing faster than the conservative Anabaptist groups in the Americas. Alongside their German-related vernacular languages, members of these communities also continue to use a form of High German in worship. 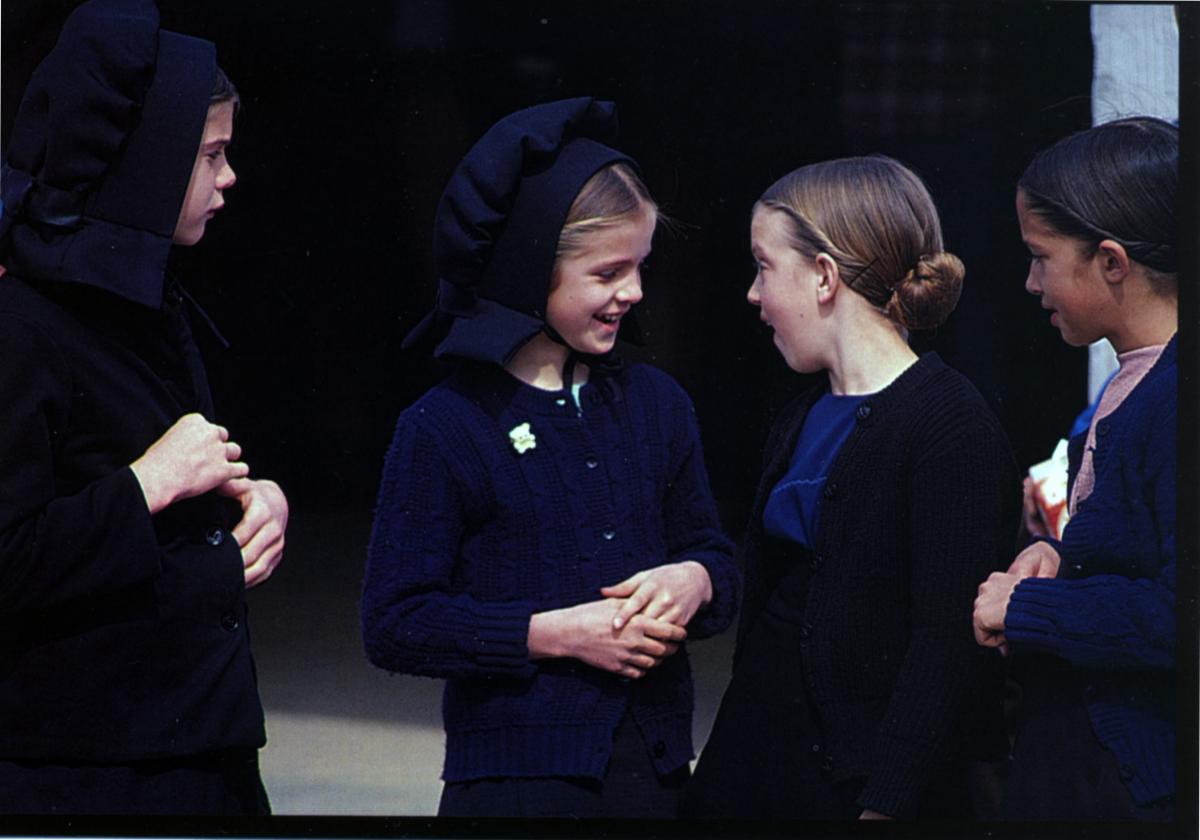 To be sure, the continued use of German in America for multiple generations after emigration is exceptional. The typical scenario, not only for German, but all non-English immigrant languages (including Spanish, contrary to stereotypes), is what linguists have called the “three-generation model” of language shift. According to this model, adult immigrants to this country acquire English to some degree, but remain proficient in their mother tongue. Their children may grow up speaking the heritage language at home, but by the time they reach adulthood, most have shifted to using mainly English. By the third generation, the grandchildren of non­­–English-speaking immigrants, the transition to English monolingualism is largely complete.

With regard to specifically German, as far back as the late eighteenth century, critics, often highly educated natives of German-speaking Europe, lamented the fact that the children of immigrants were losing their heritage language. One such observer, writing in 1788 about what he witnessed in Pennsylvania, had this to say:

Grown persons who come over from Germany partially forget their native language in their vain attempt to learn a new one; the native-born almost never learn their mother tongue properly and well. The children of Germans, especially in cities, become accustomed to English in the streets; they are addressed in German by their parents and reply in English. (Schöpf 1788, 156)

At the turn of the twentieth century and before the onset of anti-German feelings, Wilhelm Hense-Jensen, in a monumental history of the German element in Wisconsin, had this to say about what he observed in the Badger State:

If in one of the German wards of Milwaukee, the sixth, for example, in 1870 practically every adult man and every adult woman was a native of Germany, today most residents who were born here definitely reveal their German ancestry in their lifestyle, outlook, and frequently also in their accent when speaking English. Yet they think and feel entirely differently than their immigrant parents. … The people born here of German ancestry prefer to hear English spoken, but even those who have immigrated in the last twenty years, if they are even minimally active mentally and if through their occupation they have the opportunity to come into contact with English-speaking people, acquire the national language in the shortest time. (Hense-Jensen 1902, 254–255)

The longstanding inclination for German Americans to shift to English independent of World War I is underscored in an editorial titled “Evidence of Assmilation” that appeared in the October 20, 1921, edition of The Houston Post, which is reproduced in its entirety here.

After a career of 49 years, the German daily newspaper, “Amerika,” published in St. Louis, will suspend publication at the end of October. Editor [Arthur] Preuss, announcing the coming suspension, says: “It has been an uphill fight for German newspapers ever since the war. The older generation is dying out, and the new is not interested in and does not read the German language press. There is no immigration to afford new readers.”

The reasons cited by the editor for the passing of “Amerika,” which for half a century was one of the influential foreign language publications of the country, are interesting as reflecting the changed conditions in the United States, and as showing that perhaps the melting pot is functioning more effectively than it sometimes seems.

The war with Germany naturally aroused a certain amount of popular prejudice against the German language papers, regardless of whether they deserved it or not. Under war conditions, it was inevitable that newspapers published in the enemy language would suffer financially and in prestige. The adhesion of the great majority of Americans of German descent to the American cause was a factor in alienating readers of German papers and turning them to the English language press.

But, perhaps, the more fundamental cause for the decline of the German language press is given in Editor Preuss’ second statement: “The new generation of German people in America is not interested in German papers.” These young people, educated in English-speaking schools, and associated in business and social life with English-speaking Americans, find no need of a German paper. In their case, the process of assimilation has gone a long way.

In the past, when German immigration was heavy, when free public schools were not so numerous, and when modes of transportation and communication were slower and people lived more isolated lives, the German papers filled a need. They served as mediums of publicity among the great number of German-speaking people. The day of their usefulness is rapidly passing, however. German immigration is restricted, and many of the new German immigrants speak English. The war gave tremendous impetus to the study of English on the continent. Then, too, the facilities foreigners have to learn English after they arrive here are now so numerous that immigrants, old or young, have little excuse for not learning the language soon after they arrive.

Without intending any reflection on the loyalty or integrity of the German, or other foreign language press, it may be said that its passing in America is a healthful sign for the country. A common language is an essential to the highest degree of national unity. The introduction of the English tongue among our foreign born people is the first step in the Americanization program. When the foreign language press declines because it no longer fills a need, it is gratifying evidence of progress in assimilation of our alien population.

On the three-generation model of language shift in the US:

On the questionable role of WWI in the decline of German in the US: