According to a widespread legend, President John F. Kennedy proudly declared himself to be a jelly doughnut before thousands of Berliners in June 1963. This story is a familiar one to students of German in US classrooms, but it is unfounded.

One of the many differences between the grammars of German and English pertains to the use of articles, especially indefinite articles (a[n], ein) that come right before words denoting professions and geographic origins. While in English one would say I am a student and I am an American, the German equivalents are Ich bin Student and Ich bin Amerikaner, without the ein. It is a common error for learners of German to say Ich bin ein Student (Amerikaner). 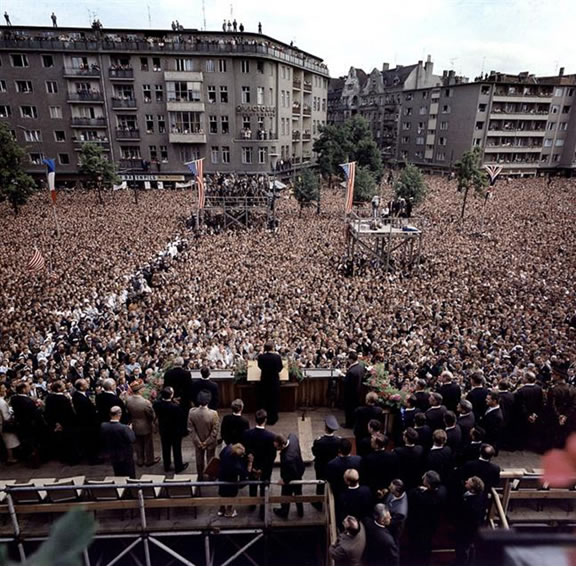 Now turn the clock back to June 26, 1963, and President Kennedy’s legendary visit to Berlin at the height of the Cold War. One of the president’s most famous lines of all time was the one he uttered twice, at the beginning and end of his stirring speech, to express solidarity with the citizens of the divided city, namely Ich bin ein Berliner. Ever since, German teachers in this country have quoted this line as an example of what their students should NOT do. Pointing out that one of the regional words in German for ‘jelly-filled doughnut’ is Berliner, people have assumed that President Kennedy outed himself as a pastry to a city of amused Germans.

In a 1993 article, the Max Kade Institute’s founding director, Prof. Jürgen Eichhoff, explains that Kennedy’s words (which were provided to him by a native speaker of German, Robert H. Lochner) were in fact grammatically correct. A rarely mentioned corollary of the rule about ein in front of professional terms and nationalities in German prescribes that if the subject of the sentence only has certain characteristics of the profession or nationality referred to, but is not really a student, American, Berliner, etc., then the ein is required. For example, Ronald McDonald would say in German Ich bin Clown. On the other hand, if someone is just acting silly, that person would have to say Ich bin ein Clown.

Thus President Kennedy did not misspeak, which explains why the myth developed only outside of Germany; see the serious image from German media at left where JFK’s words were reprinted. But even if Kennedy had misspoken, Professor Eichhoff adds, native speakers of German would have understood precisely what he meant. And in an ironic twist, the dialect word Berliner, referring to a pastry, is not even used in the city of Berlin, but farther west. Interestingly, it was introduced by nineteenth-century immigrants into the English of the Upper Midwest, as the Dictionary of American Regional English demonstrates.

To hear President Kennedy utter his famous line, click the audio file below: