As far back as the colonial era, a variety of American publications have appeared in the German language, including approximately 5,000 newspapers. These newspapers promoted assimilation by explaining to newcomers key aspects of American politics and culture at the local and national levels. The title of the 18th-century Lancaster, PA, newspaper depicted here is “The German Porcupine.” The porcupine was an early American symbol of independent journalism: a peaceful creature who defends itself with its sharp quills. Note that the angel above the porcupine is blowing the trumpet of “freedom of the press” (Preßfreyheit). 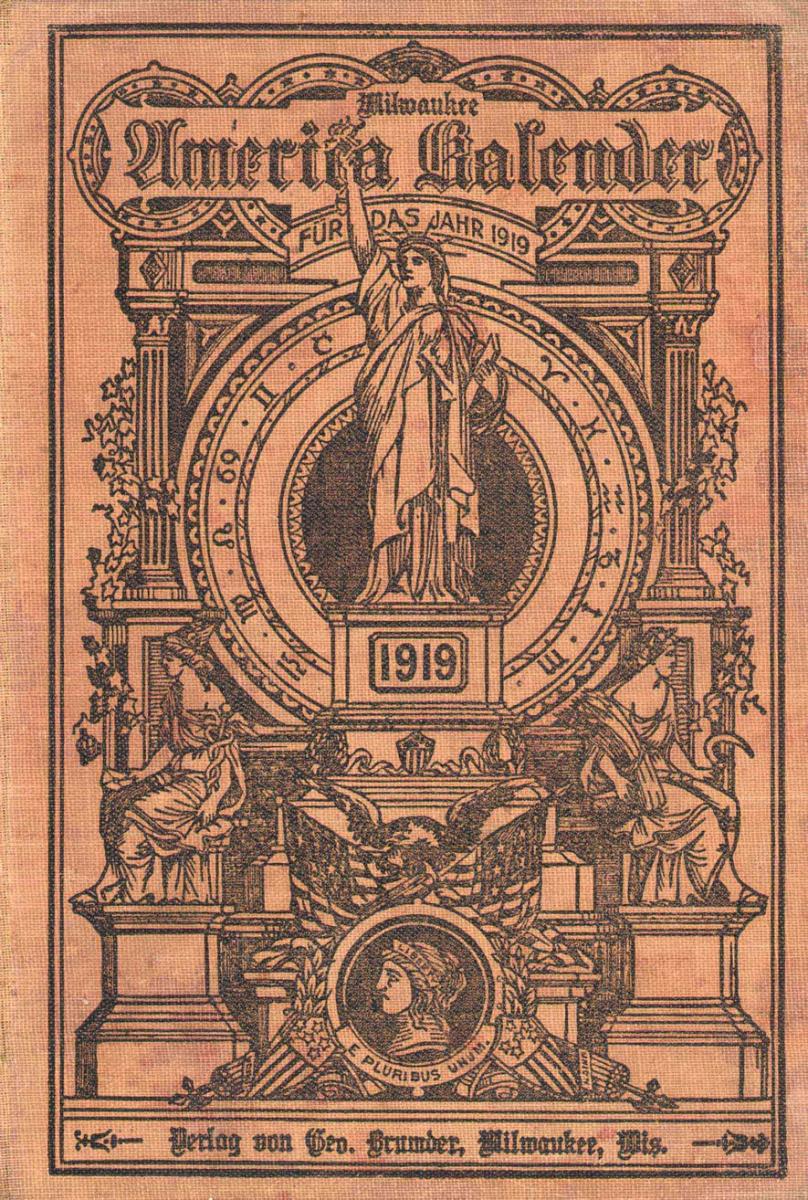 The George Brumder Co. of Milwaukee, headquartered in the Germania Building, was one of the largest German-language publishers in the U.S. In addition to books and the Germania newspaper, Brumder published an annual almanac (“Germania Kalender”). Note that in 1919, in response to anti-German feelings during WWI, the almanac was renamed the “America Calendar” and Mother Germania was replaced with Lady Liberty.

One of the longest-running German-language newspapers in the U.S. was Aufbau (‘building up’), which began its 70-year history as the newsletter of the German-Jewish Club of New York. Aufbau thrived by changing with the times, incorporating an increasing number of articles in English for their U.S.-born readers and becoming the world’s premier source of information on Jewish issues in German. Leading German-speaking exiles wrote for Aufbau, including Hannah Arendt, Albert Einstein, and Thomas Mann. Aufbau was also one of the very few newspapers to report in detail on the events of the Holocaust. It ceased publication in 2004, but in 2005 it has been reborn as a monthly magazine published in Zurich, serving mainly the growing Jewish community in today’s Germany.

Until about the mid-20th century it was quite common for religious services in heavily ethnic German areas of Wisconsin to be held in German. Today, most churches conduct worship in English only and have translated previously German names into English. Interestingly, the Lutheran church and school Zum Kripplein Christi (“At the Little Manger of Christ”), located near Iron Ridge, Dodge Co., WI, has retained its German name. 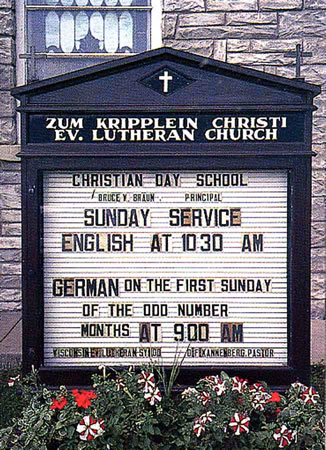 Aside from churches, German-English bilingual schools were common in many parts of the country into the 20th century. While most were parochial, several were publicly funded schools. Milwaukee was home to the only secular institution to train German-English bilingual educators, the German-American Teachers’ Seminary, which operated from 1878 to 1919. The seminary’s building in downtown Milwaukee is now part of the Milwaukee School of Engineering. The tradition of quality bilingual education is carried on today by the Milwaukee German Immersion School, the largest bilingual immersion school in the United States.