German dialects are classified as either Low or High, depending on the region in Central Europe from which they derive. Thus, dialects of the north, where the landscape is quite flat, are called Low (Platt- or Niederdeutsch). The further south one travels, flatlands give way to hills and eventually, in Switzerland, the Alps; the varieties spoken in these areas are High German dialects. Since this territory is so large, High German dialects are divided into three subgroups, West Central, East Central, and Upper. The term High German (Hochdeutsch) also refers to the standard written and spoken language used in schools and the media. That is because Hochdeutsch is based historically mainly on written dialects that were used in the High German dialect area, especially the East Central region where the modern German states of Saxony and Thuringia are located.

This map shows the major German dialect regions in the first half of the twentieth century. The linguistic border between Low and High German is indicated by the thick red line running from west to east. It is known as the Benrath Line, named after a historic village close to the line that is today part of the city of Düsseldorf. The blue area north of the line is Low German. In the High German area, the West Central region is purple, East Central is green, and the Upper region is orange. Upper German dialects are further subdivided into three major groups, Alemannic in the west (which includes Swabian and Swiss German, among other dialects), Bavarian-Austrian in the east, and (East) Franconian in the north. The large brown “language island” (Sprachinsel) in the East Central area is Sorbian (Wendish), a Slavic language. Hatched lines indicate areas where dialects are mixed with one another. 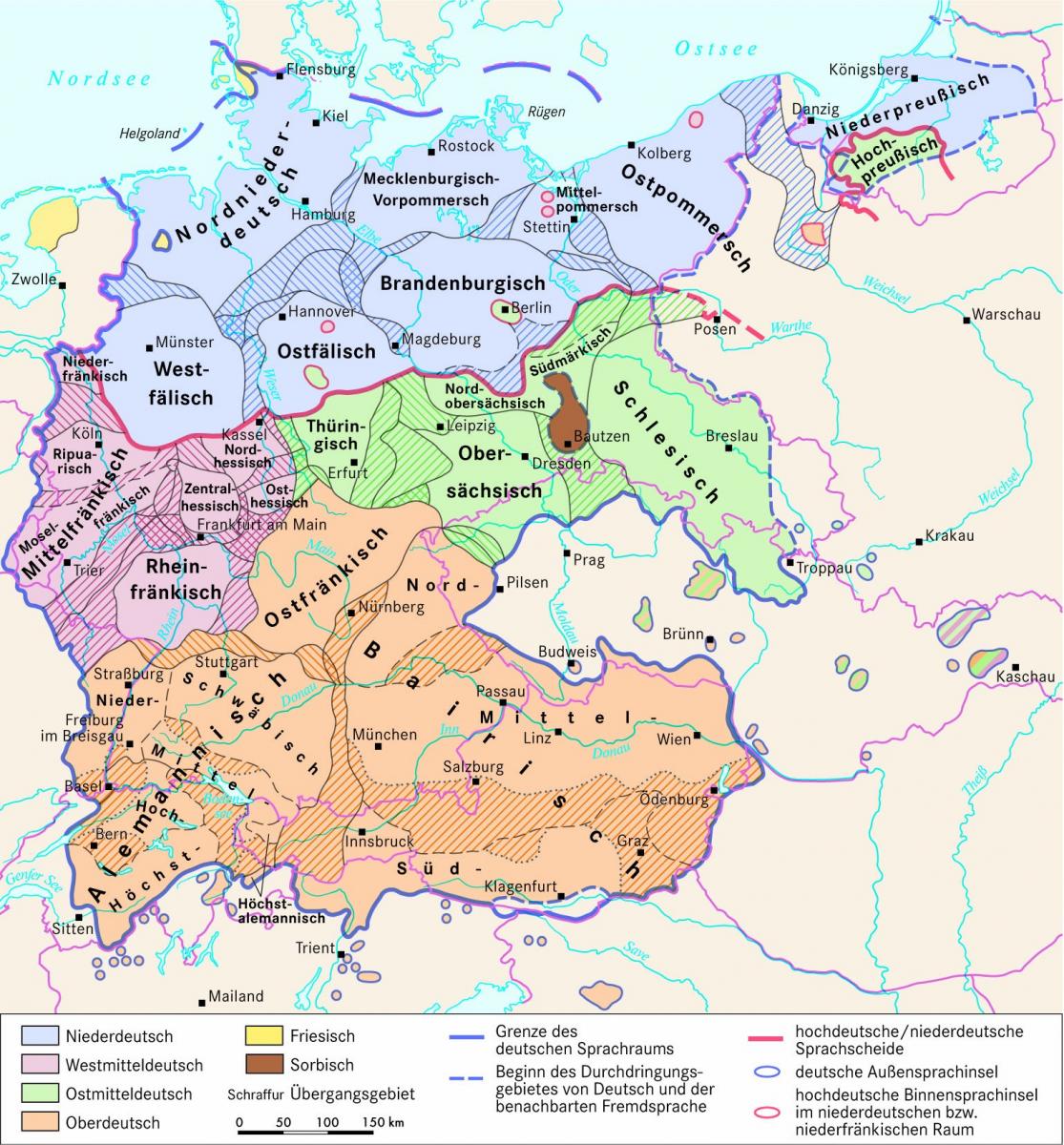 Below is a topographical map of modern Germany that clearly shows the different physical landscapes that correspond to the Low and High German dialect regions. 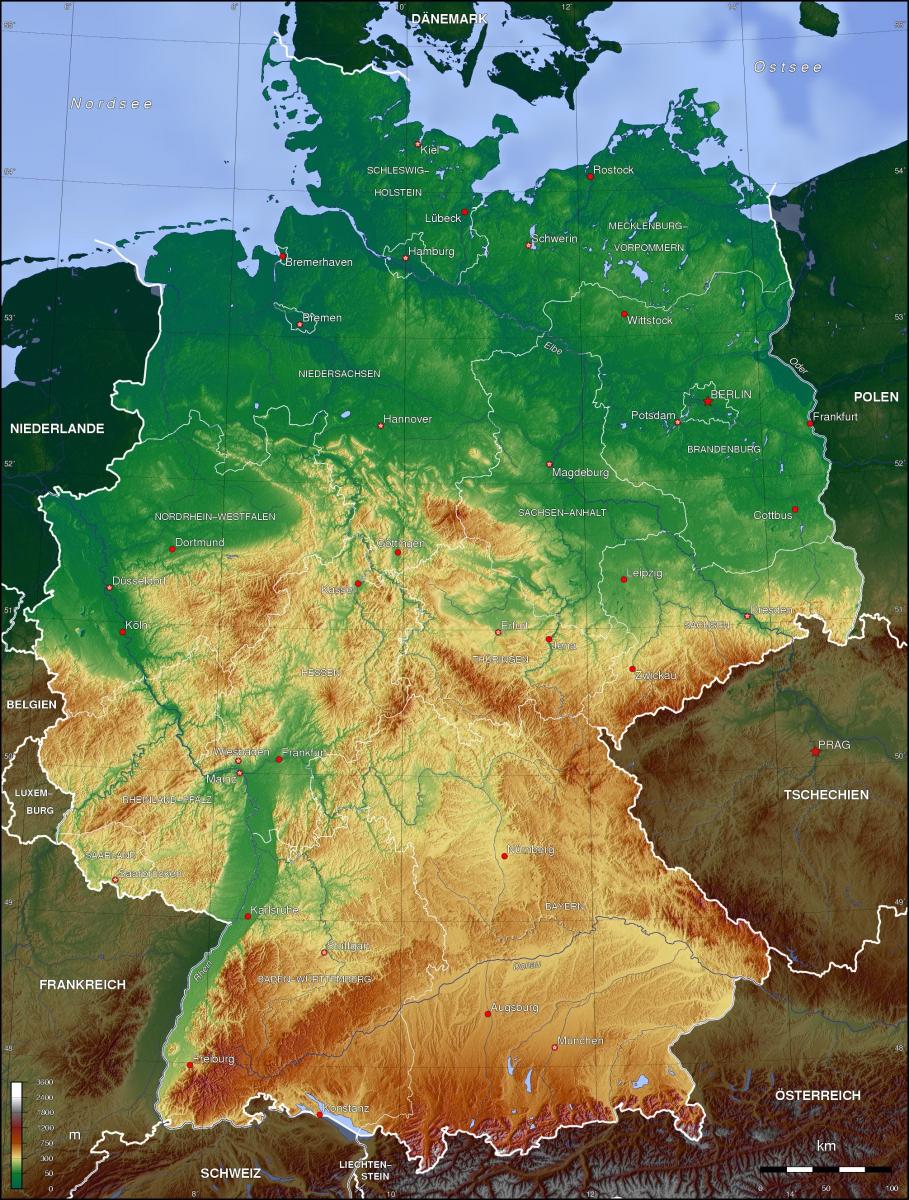 German-speaking immigrants to Wisconsin came from diverse parts of Central Europe. On arriving in Wisconsin, mainly during the nineteenth century, these immigrants typically identified with their particular linguistic and cultural region, like Pomerania, Hesse, or Bavaria, rather than with “Germany,” which did not exist as a unified country until 1871. The historic diversity among German-speaking settlers in Wisconsin is reflected to this day in many heritage clubs across the state, including the Plattdeutscher Verein (Low German Club) of Watertown, WI. This club was founded in 1882 with the twofold mission of “fraternalism and the perpetuation of the German language, especially the Plattdeutscher tongue.” 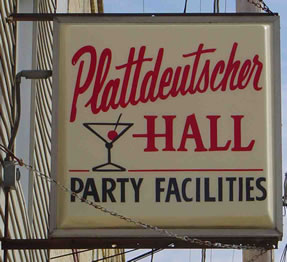 Most Wisconsin Germans were Low German-speaking, though a sizable percentage also had a good knowledge of the High German standard, which was used in a vibrant press (especially German-language newspapers), schools, and churches. Although most speakers of Low German in Europe have been literate in High German only, a number of writers have produced original literature in Low German and other dialects. Germany’s most famous dialect author was Fritz Reuter (1810–1874). Born in Stavenhagen, Germany, Reuter wrote a large number of novels in his native Low German, thereby contributing significantly to the prestige of all German dialects as legitimate vehicles for literature. Mark Twain, who drew heavily on dialect in his own writings, mentions Reuter’s works in “A Tramp Abroad.” Because of the large representation of Low German-speakers across Wisconsin, especially people whose ancestors came from Pomerania, many of the Wisconsin German recordings in MKI’s North American German Dialect Archive were of Low German speakers. The earliest of these were made by Prof. Lester W. J. “Smoky” Seifert (1915–1996), born in Juneau, Dodge Co., WI, in the 1940s, a third-generation Wisconsinite.

Prof. Seifert (shown below) conducted interviews with many speakers of the Oderbrüchisch dialect, which he himself spoke natively, along with High German and English. He was a professor of German at the UW–Madison and a leading figure in German-American linguistics, not only because of his research on Wisconsin German, but also Pennsylvania Dutch, on which he wrote his doctoral dissertation. Many of the MKI’s other interviews were made by Prof. Jürgen Eichhoff, now retired from the UW–Madison and living in Germany. Prof. Eichhoff grew up in Hamburg and, like Prof. Seifert, learned both Low and High German natively. 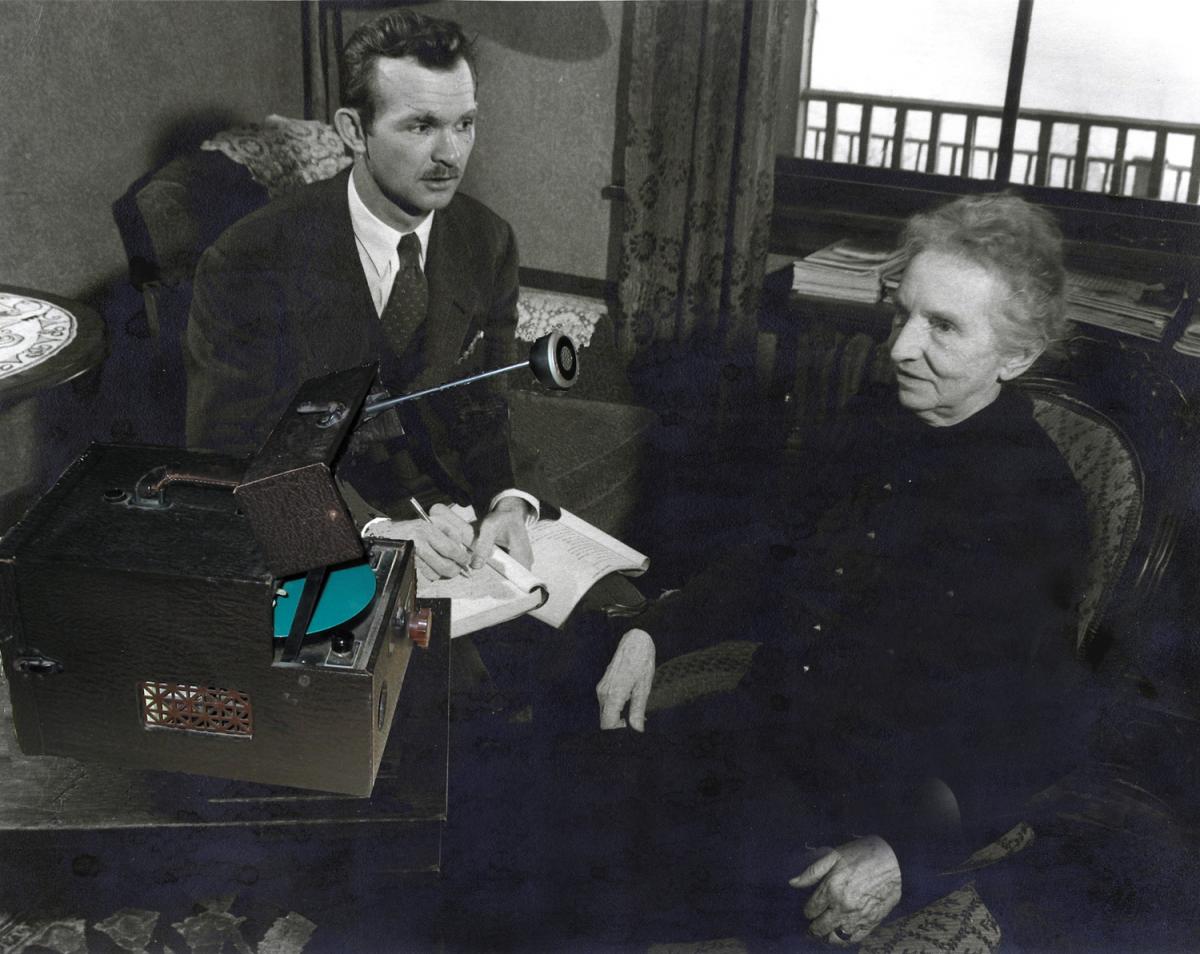