“The time has come, the Walrus said, / To speak of things we flout— / Of Kaisers, frankfurters, and sich, / Including sauerkraut”

Thus began an article from the Associated Press that appeared in newspapers across the US on April 25 and 26, 1918, which reported on an appeal by manufacturers of sauerkraut in New York City to the local Federal Food Board “to do something, anything, everything in its Hooverian power to prevent the popular wrath against the Kaiser, Kultur and Kabbage from driving sauerkraut off the American dinner table.” The manufacturers were alarmed that the demand for German-style pickled cabbage in the city had dropped precipitously after America’s entry into World War I the previous year. “The price of sauerkraut didn’t start coming down until folks became so mad at the Kaiser and everything German that they simply wouldn’t eat the blamed stuff. Now, the manufacturers say they are losing money selling it at $13 and $14 a barrel, and there are signs they are going to lose still more unless the Food Administration helps them,” AP reported. 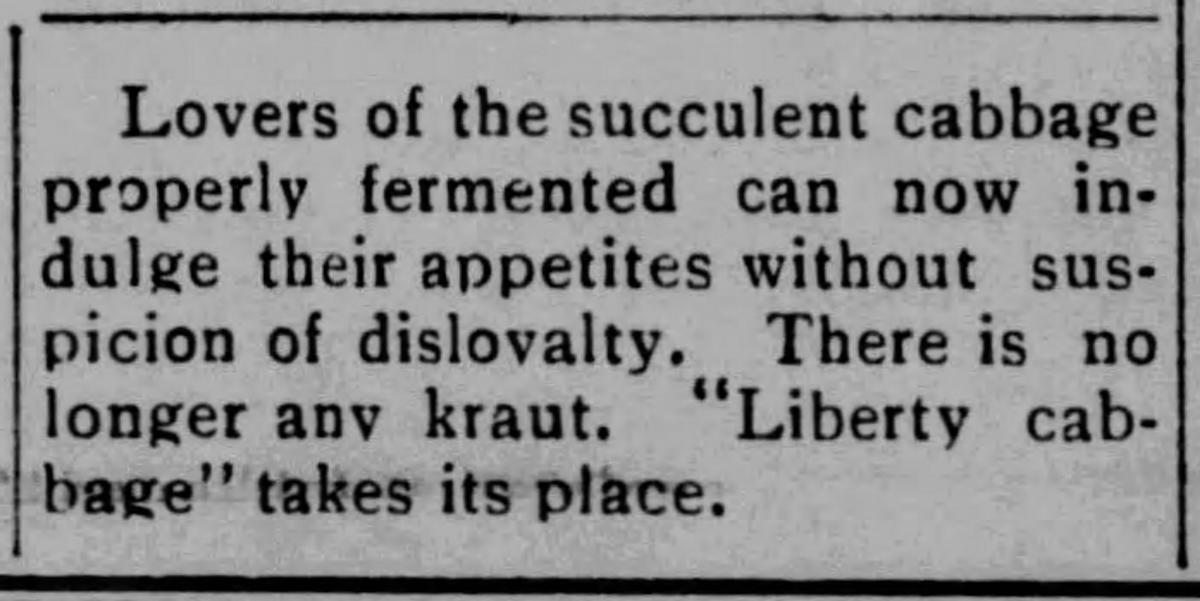 To address this problem, the New York sauerkraut manufacturers proposed renaming their product “liberty cabbage,” following the model of health officials at Camp Dix, NJ, who earlier that year moved to redesignate “German measles” “liberty measles.” While the term “liberty measles” did not exactly go, um, viral, “liberty cabbage” was just one of several suggestions made in 1918 to purge American speech of German influences. Other recommended substitutions included “liberty pup (or hound)” for “dachshund”; “liberty steak (or sandwich)” for “hamburger”; “liberty sausage” for “frankfurter.” The use of the descriptor “liberty” to evoke American patriotism in product names goes back apparently to 1773. In the wake of the Boston Tea Party, colonists focused on using indigenous ingredients to produce “liberty teas,” a term that is in fact still used today to describe distinctively American blends.

The linguistic process by which a word or expression is invented to substitute for another word or expression was first described by a German philologist, Werner Betz (1912–1980), who dubbed it Lehnschöpfung ‘loan creation’. Loan creations typically occur when speakers of a given language seek to avoid borrowing a foreign term by coming up with an alternative using native linguistic elements. Linguistic chauvinism is typically behind loan creations. 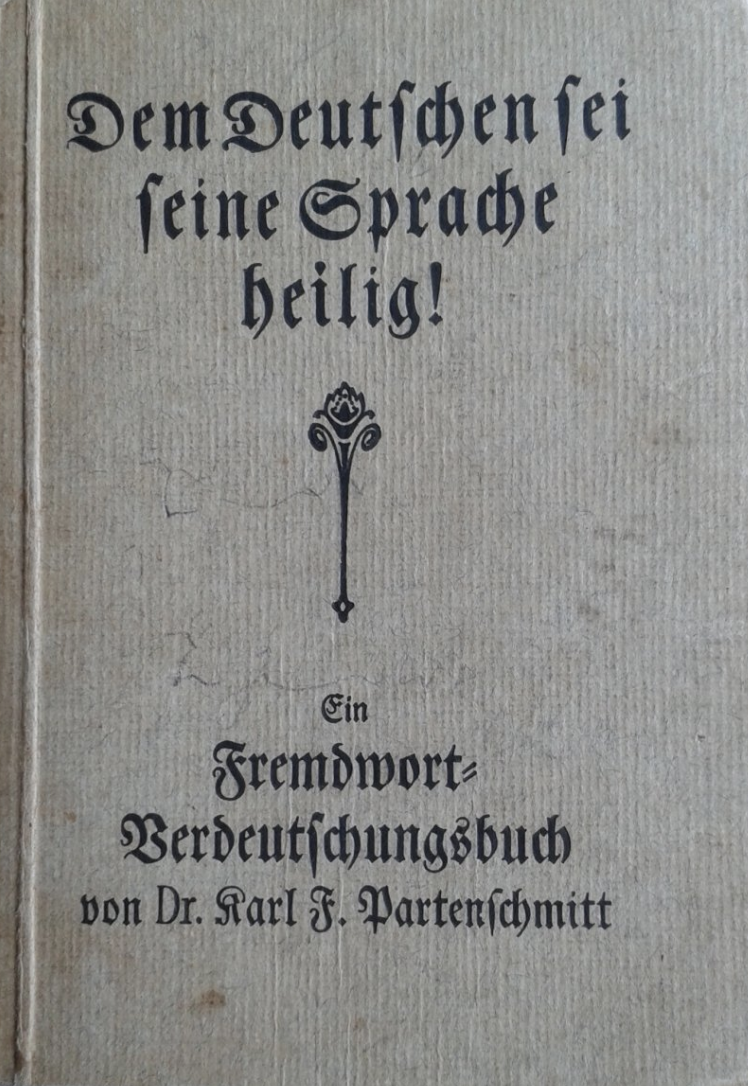 At the same time that some Americans were pushing for the use of “liberty” expressions, Germans were encouraged to “Germanize” their speech by avoiding words derived from the languages of their adversaries, especially French and English. To that end, Verdeutschungsbücher ‘Germanization books’ consisting of recommended substitutions for foreignisms were widely circulated. In one, Dem Deutschen sei seine Sprache heilig! (To the German may his language be holy!), the first edition of which had been published already in 1888, it was recommended that Germans say Fischspieß lit. “fish pike” instead of Harpune and Rinderhirt lit. “cattle shepherd” for Cowboy. Instead of bravo! they were urged to shout gut! ‘good’, lobenswert! ‘praiseworthy’, trefflich! ‘splendid’, or wacker! ‘valiant’. 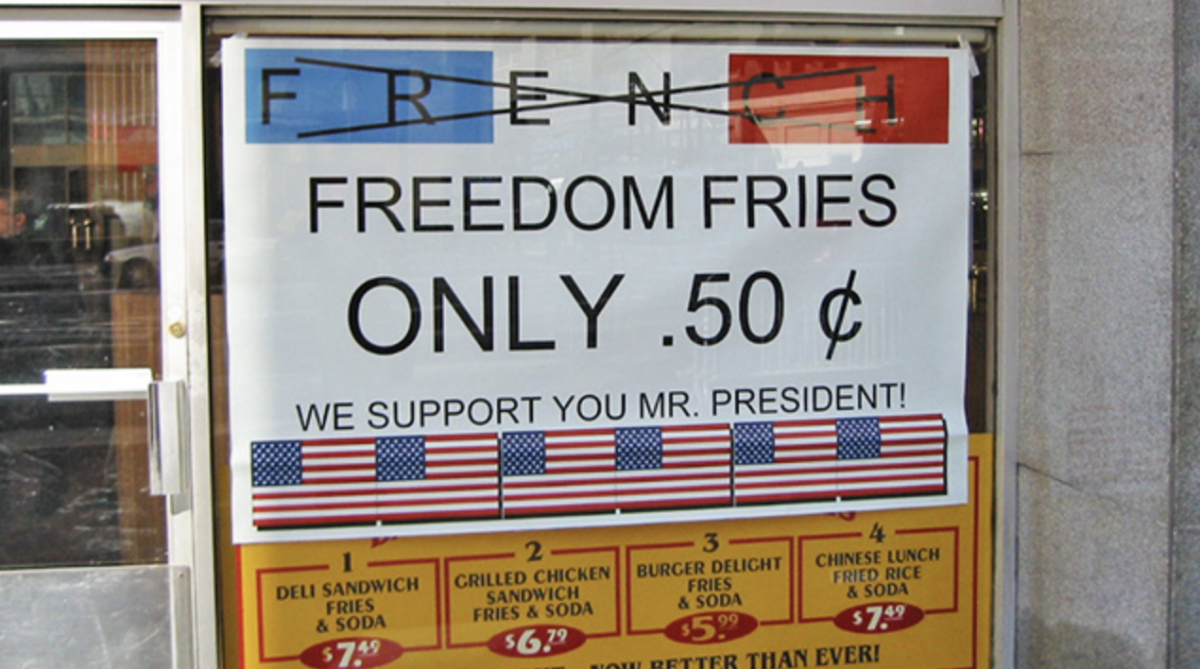 Occasional attempts to root out “foreign” elements in American English have largely been futile, probably because English vocabulary is already overrun with words derived from non-Germanic languages, especially French, Latin, and Greek. Yet that did not deter the composer Percy Grainger (1882–1961), who immigrated to America from England in 1914, from insisting on “room-music” instead of “chamber music”, “dish-ups” instead of “arrangements”, and, my personal favorite, “louden lots”, which was molto crescendo in Graingerese. Needless to say, Grainger’s usages never caught on. Similarly, the move in 2003 by the Congressmen Bob Ney (R-Ohio) and Walter B. Jones (R-NC) to rename “french fries” and “French toast” “freedom fries” and “freedom toast” was not met with a loudening of support. 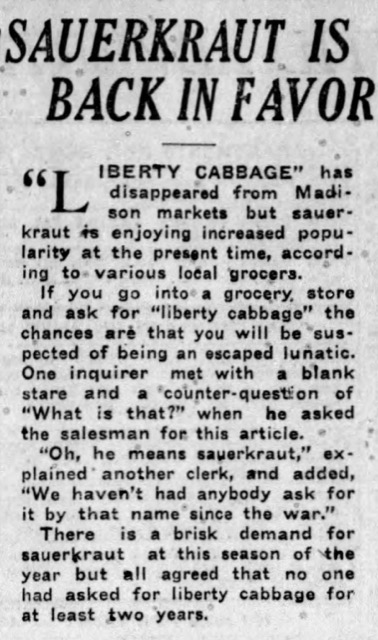 A search of US newspapers shows that the use of “liberty” expressions was, not surprisingly, very short-lived. On April 9, 1921, the (Washington, DC) Evening Star printed the following short poem titled “Something in a Name”: “The fighting is over. We’re striving at last / To banish from thought certain griefs that are past; / For liberty cabbage is now ladled out / And eaten with pleasure as plain ‘sauerkraut’”. The following year, on January 29, 1922, the Wisconsin State Journal (see image at right) boldly proclaimed that “Sauerkraut Is Back In Favor,” as it remains today.